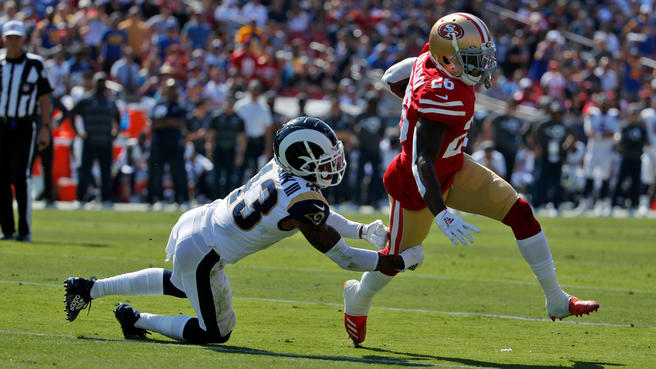 The Patriots and the 49ers are the only two undefeated franchises left in the league and we’re backing both of them to stretch that unbeaten run into Week 8. Cast your eye over our Week 7 predictions below.

The 49ers are on a roll. They’re on their best run since 1990 and last week they upset the odds to beat NFC Champions Los Angeles Rams. Their opponents this week, the Washington Redskins, picked up their first win of the season against Miami last Sunday and some think that that might as good as it gets for the lowly franchise.

Former Redksins OC Kyle Shanahan is now the Head Coach in San Francisco and he seems to have moulded his team into Super Bowl contenders. They have the fourth best total offense in the league and the second best total defense. That should be too much to handle for the Redskins and their interim Head Coach Bill Callahan.

The spread looks appealing at 9 points and we’re backing the 49ers to cover and boost their record to 6-0.

The Packers lead the NFC North, opening the season with a near perfect 5-1 record. Their QB Aaron Rodgers has been superb in the opening six weeks and it would be a surprise if they are not playing playoff football come January. Their opponents come into this one off a bye week after their 24-21 victory over the Bears in London.

It’s amazing how quickly perceptions can change in the NFL.

The Raiders were the laughing stock of the NFL Preseason. Their star summer recruit (and star of this summer’s Hard Knocks series) Antonio Brown left without playing a regular season game. After Week 3, the Raiders were 1-2 and looking ahead to a seven week stretch without a home game and little hope of a playoff spot. Today, they are 3-2 and $100 million man Jon Gruden is confident of securing a playoff spot.

Looking ahead to this game it looks set to be a close one. The Packers played a tough game on Monday night while the Raiders have had two weeks to prepare. The bookies are giving the Raiders 5.5 points and that seems a few too many to me. I’m backing the Raiders to cover the spread. Knock on wood if you’re with me.

We’ve said it more than once but it always looked likely that the Patriots would start their NFL season 7-0. At the time of writing, it looked as if their Week 8 opponents, the Cleveland Browns, would be their first real challenge of the year. On current form you would now have to say that 8-0 looks like a formality and their Week 9 match up with the Baltimore Ravens will be their first real challenge.

This is the second fixture between these teams this season. On the previous occasion and the Pats only won by 16. For this Week 7 encounter the spread is only 9.5 points. Sam Darnold has returned for the Jets, leading them to their first win last week, but even still the Pats should have enough to win by double digits.

All lines correct at time of writing. All times given UK.