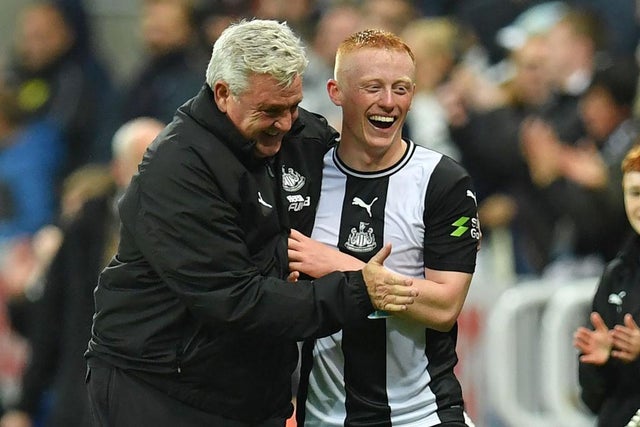 They said that Steve Bruce had been holding Matty Longstaff back and in training he shows all the hallmarks of the next future Geordie talent, the previous on the homegrown conveyor belt being his elder brother Sean.

Give the manager credit where it’s due it was a master stroke.

All the pressure was on Manchester United, a side that last won away from home over seven months ago and had three nights ago travelled to Holland to play out a tame goalless draw on a plastic pitch which is renowned for causing injuries which it duly had.

The Geordie crowd understandably parked its regular disdain for the chairman and got behind the team needing their first home win of the season with the Longstaff brothers Matty and Sean holding the midfield together. Newcastle weathered the first half where Man United had more possession without creating clear-cut chances.

A strike from the edge of the box by younger brother Matty sealed the win for the Geordies and rounded off a MOTM performance on debut.

The post-match Sky Sports interview with the Longstaff brothers brought a delight and a residue of faith that not all aspiring young talents are merely in this great national sport of ours for the money.

It will be interesting if this sparks something for Newcastle. A trip to play free scoring Chelsea at Stamford Bridge awaits after the International break. As for United, a defeat on the same weekend’s fixture at Anfield could leave them sitting in the relegation zone.

All odds taken from Bet365

NOTHING BRIGHT ON THE HORIZON FOR SPURS

Tottenham Hotspur lost their 3rd game this season at Brighton.

The last away match they won in the Premier League was way back in January at relegated Fulham. This is nowhere near top four challenging form and their title aspirations appear to be already up in smoke well before Bonfire Night.

The manner of the defeat was more alarming. The 3-0 loss did not flatter a Brighton side who traditionally struggle to score goals, they average well under a goal a game for the last three seasons. This was the failing of Chris Hughton teams that even in their promotion year they struggled to kill games off and won many matches by the solitary goal.

Tottenham had only eight shots in the entire game compared to Brighton’s seventeen.

Something is clearly not right at Spurs, people can argue that the squad has seriously over-achieved under Pochettino especially given resources and ground complications of last season but the team has already been beaten by sides who will be at the relegation end of the table come Spring.

Maybe it will be in January when the next transfer window takes place that the truth of the internal rumours are known and the future of the manager and certain unsettled players is clearer, but on current form Tottenham could be mid-table with the prospect of being out of the Champions League by then.

All odds taken from Bet365

A fortunate awarded penalty in the 95TH minute coolly slotted away by the ever reliable James Milner continued Liverpool’s unblemished league run this season.

The league leaders already have a six-point lead over Man City and are now installed as odds-on for this season’s title race. Even though this was the Reds fourth win this season by the odd goal – Klopp’s men dominated the fixture for long spells accruing eighteen shots to the visitors’ two although the possession stats showed only 51% to the home side.

Liverpool play both Manchester clubs and Tottenham in their next four league fixtures and  the current title odds of 4/6 will seem very generous if the club still has not dropped points after those games.

Leicester continue to show that they are competitive at the top level and without the inconveniencies of midweek European football this term they could challenge a top four position.