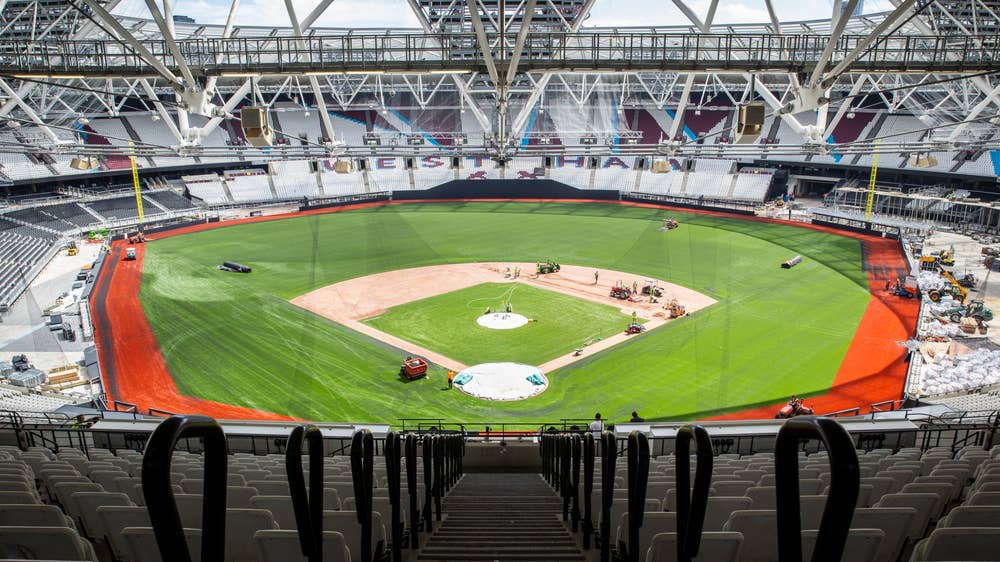 Major League Baseball comes to Europe for the first time ever as the New York Yankees and Boston Red Sox play a two game series in West Ham’s London Stadium, host venue of the 2012 Olympic Games. It has taken three weeks to transform West Ham’s home ground into the UK’s home of baseball. The athletics track around the pitch has been covered in 140,00 feet of artificial turf while 345 tonnes of of clay has been shipped from America to form the diamond. Workers have also had to erect temporary dugouts and dressing rooms for both squads.

The 60,000 seats available for each game sold out in under fifteen minutes and it’s fair to say there’s excitement on both sides of the Atlantic for this match-up.

The inaugural European games features two traditional MLB powerhouses and divisional rivals. The Yankees currently lead the American League (25/06) with a 50-28 record while Boston sits in third place with a 43-37 record.

At the time of writing the Yankees have won nine of their last ten games and pitcher James Paxton has had a big role to play in that run. Paxton has been an elite pitcher despite his injury worries since his acquisition from the Seattle Mariners in November 2018. Left-hander CC Sabathia is also likely to feature.

Rick Porcello and Eduardo Rodriguez are expected to start on the pitcher’s mound for Boston on Friday and Saturday respectively. They will be joined on the 26-man roster by MVP outfielder Mookie Betts. These games are important to the standings in the American League East. Boston are eight games back from the Yankees and three behind the Tampa Bay Rays. After his slow start to the season Jackie Bradley Jr. is combining Golden Glove defence with big hitting.

The games will be shown live on BT Sport, Major League Baseball’s official partner in the UK. They have also come to a once-off agreement with the BBC who will stream both games lives on all their online media channels.

What to expect at the game

MLB are trying to bring the authentic ballpark experience to London. They are bring some of the most popular in-game events from around the league to London for the games. There will be a special version of the Washington Nationals famous President’s Race featuring Winston Churchill, Freddie Mercury, Henry VIII and the Loch Ness Monster. Meanwhile, The Freeze is coming all the way from Atlanta to race a fan from foul-pole to foul-pole.

Keep an eye out for some of the smaller details too. The big screen and stadium announcer will be keeping fans in the loop by explaining what’s happening out on the field. There will be vendors in the stands selling hotdogs, popcorn and drinks. To top it all off Prince Harry will throw the ceremonial first pitch on Friday night.

The quirky dimensions of the stadium will also play a part in the spectacle. Just 385 feet separates the batter’s box and the 16-foot high centre field wall at London Stadium. In contrast, the batters at Boston’s Fenway Park are 420 feet from centre field and they have to contend with the ‘Green Monster’, a 37-foot wall in left-field. The openness of the ballpark could result in plenty of home runs on Friday and Saturday.

All prices taken from RedZone Sports

We will update with game betting when prices become available.