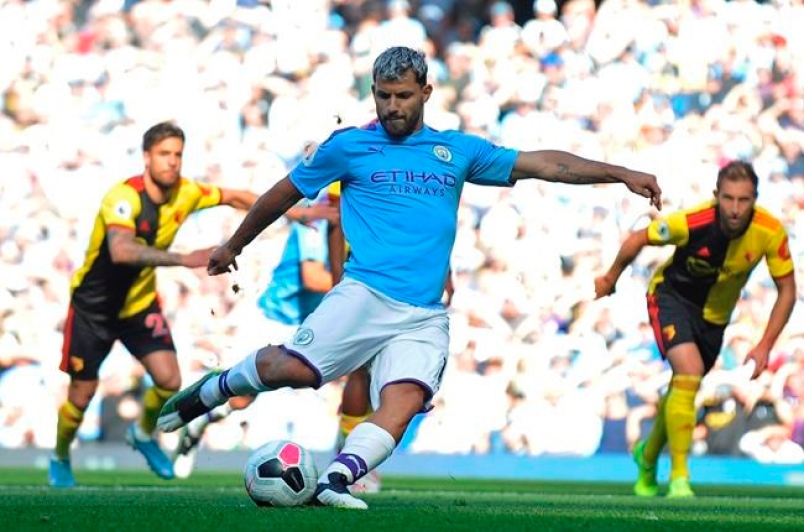 Manchester City bounced back from their defeat to Norwich with a thumping 8-0 win over Watford!

When you see an emphatic scoreline in any league, let alone top flight Premier League, the initial thoughts are – Were City brilliant or were Watford woeful?

The stats on the match show that City’s shots at 28 were above season average of 24 and their possession was 70% which again was slightly higher than average but as the contest was virtually over after 18 minutes at 5-0, those stats possibly flatter Watford.

Although Bernardo Silva grabbed the headlines with his first top flight hat-trick, again, the key player was Kevin De Bruyne. The Belgian provided another two assists and a goal. He is averaging over one assist per game this season.

City’s current weakness is in defence especially given the long term injury to Aymeric Laporte. That frailty was not exposed in this fixture against a side who have only scored three goals in open play this season while conceded on average three a game and already on their second manager this term.

Conclusion would be don’t be too sucked in by this scoreline from a City perspective. The bigger clue might be where Watford languish at the end of the season. The Hornets are best price 15/8 to get relegated with Ladbrokes.

We have highlighted Leicester City’s potential to break into the top six this season in previous blogs.

So for them to came from behind against a lackluster Tottenham was not a surprise in a game which the home team dominated for long spells.

There is clearly something not right with Spurs currently. Whether it was the summer uncertainty around both Christian Eriksen and the manager’s future or not but looking at their results, they have thrown away three leads already this season and two of them were two goal advantages.

With the exception of Man City & Arsenal away, Tottenham have had a soft set of opening six fixtures this season and have already dropped ten points from a possible eighteen. This is far from Champions League qualifying form let alone from a side who had outside chances of winning the title at the offset.

An unconvincing  victory against a Villa team which led for over an hour and have subsequently only won once this season is also not top four form.

Leicester on the other hand look comfortable on the ball, and look dangerous on the attack.

Their squad has huge depth now under Brendan Rodgers and with no European football to concern them this season – decent domestic cup showings and a top-half finish must be considered the minimum requirement from a team clearly going places.

WHEN £900 MILLION GETS YOU MEDIOCRITY

Manchester United’s performance against West Ham at the London Stadium was woeful and heartless.

West Ham played well but nothing earth shattering they did not have to in securing a comfortable 2-0 victory.

When Marcus Rashford went down injured in the second half and had to be replaced by Jesse Lingard, United had no strikers on the pitch when chasing the game. A club which has spent ludicrous amounts of money over the last few seasons has reached a new low.

As Gary Neville stated on Sky Sports the core spine of the team still is not there and it will take probably more money in a January to attempt to rectify the demise.

The shining light for United on Sunday was Daniel James with his electrifying pace. He proved a handful everytime he got possession but you cannot expect this young kid to bear the weight of expectation for this once great club.

The Hammers again showed that even without the influential Lanzini they have the depth to challenge the top teams, especially at home.

Those who repeatedly say that skipper Mark Noble has lost his legs at 32 years of age were again left eating their words in a Man of the Match performance, while the young Pablo Fornals built on the substitute appearance at Villa last Monday to show the fight and desire that the Hammers fans insist on as first-base criteria.

Looking ahead to this weekend’s fixtures – based on the review, Wolves to beat Watford at home, Leicester to beat Newcastle and Arsenal to beat Manchester United at Old Trafford in MNF would all have appeal.