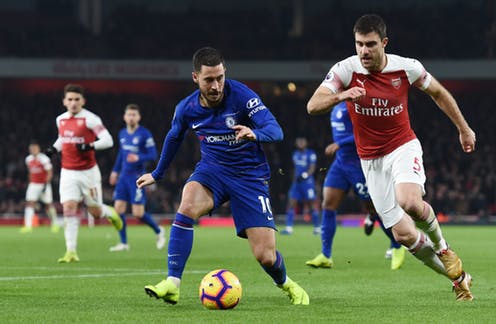 Foxes and Jamie Vardy are back

Leicester thrashed Aston Villa on Monday night 4-0. Jamie Vardy was back in the squad and made his appearance on the 59th minute where he started where he left off; scoring goals. He grabbed himself two goals and is now back to being the top scorer in the Premier League this season. He has 19 goals to his name and he should be in the starting line-up this weekend against Watford. Watford is back to their struggling ways with just the one win in their last 7 premier league games. They are sitting just outside the relegation zone and are home to the foxes early Saturday afternoon.

It’s not a given that Leicester will win this game as they have only won two of their last 7 games. However, with Vardy back in action and that huge midweek win over Villa, I feel like the Foxes will come out and prove that they are worthy of a top 3 space this season. With a positive goal difference of 30, and they are averaging around 2 goals per game, this just shows that the Foxes are bound to score at least one and it’s up to Watford to respond to that and score more. After the Premier League break, we will see what type of sides turn up.

West Ham has started to improve their performances recently, however, scrapping points from games are where they need to improve. They have changed their formation and found something that I think works for them and allows Haller and Antonio to not feel so isolated up top. They had great chances to beat the Gunners the other week, Southampton they got their result and Liverpool once again was a great team performance but just an unlucky result due to silly mistakes. If West Ham can now knuckle down on silly mistakes and really punish teams when they dominate, then I think there is a really bright future for the Hammers, which is why I’m actually going to put them down as beating Wolves on Sunday.

Wolves drew 0-0 with Brighton last weekend with both teams only having 1 shot on target. This shows slight concern for West ham as this can mean that they are very good at not letting teams break them down, but it can also be a good sign as Wolves may have lost a bit of momentum and not getting as many shots off as they may have liked. The Hammers are at home with a great set of fans which I feel will give them the advantage to go and win the game. However, with the possibility that the game will be behind closed doors, this will make the game even tougher for the Hammers to scrap out a victory. It could really make a big difference in West Ham’s fight for survival.